When you think of melanoma, you would probably think of moles growing and darkening. And your doctor or dermatologist would have likely said to you at one point to keep an eye on moles and freckles. If the moles or freckles are darkening and growing that can be a sign of melanoma. They don’t tell you about other things to look for that can be a sign of this dangerous type of skin cancer. 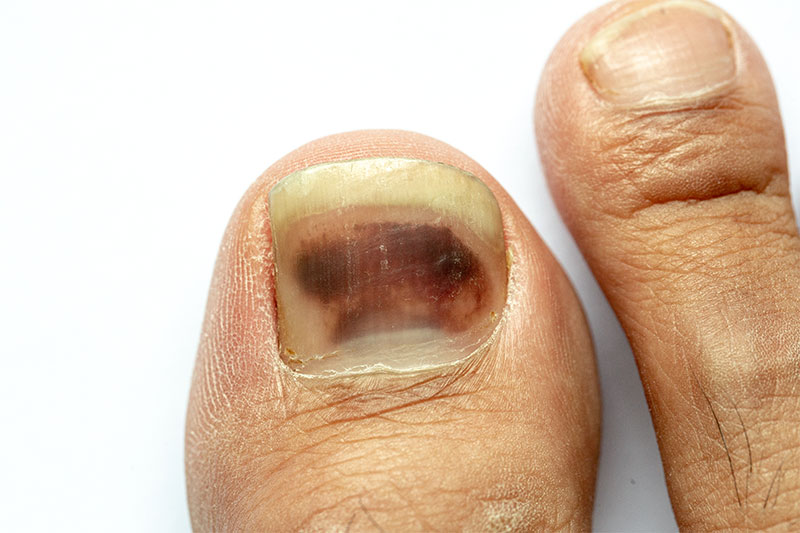 However, there are other signs to look for when it comes to the possibility of melanoma and that is to look at marks underneath your fingernails.

If You Have A Straight Dark Line On Your Fingernail, That Can Signal Trouble

Back in 2017, a manicurist told a story about a client who she worked for and noticed that she had a straight dark line in one of her fingernails. The client requested a color of nail polish that was dark enough to cover that line as it was disruptive to look at. And she stated that other salon owners believed that the line was the result of genetics, a blood blister, or a deficiency in calcium. However, this manicurist knew that line was a sign of trouble and told that client that she needed to go right to the doctor because that is a sign of melanoma.

The term for the type of melanoma that this client had is subungual melanoma or nail melanoma. This particular skin cancer is found underneath the nail instead of on the surface of the skin like you would expect to see. Even though nail melanoma is unusual, it can still happen to anyone.

What Are The Signs To Look For In Nail Melanoma?

If you have a dark line (or lighter brown) across your fingernail or toenail, then that in itself is a telltale sign. Sure, it can be a sign of a vitamin or mineral deficiency or genetics. However, either way, when you see that line underneath any of your nails, you need to go to the doctor for an examination and bloodwork. Bloodwork will indicate which underlying issue you are facing that is resulting in that dark line.

That client who was told to go to the doctor by the manicurist was thankful to her for that. As it turned out, the cancer was already spreading to her lymph nodes. That resulted in her having to go on aggressive cancer treatment. However, the dark line underneath your nail is not the only sign of nail melanoma.

What Other Signs Should You Look For When It Comes To Nail Melanoma?

If you have split nails, or darkened areas around your nail cuticles, blood or pus underneath the nail, then those can be signs as well. If you have any of those signs, you must see your doctor right away to get it biopsied so you have immediate treatment for it like the manicurist’s client did.

It is essential that you do all types of self-examinations on your skin as well as underneath your nails to make sure that there are no abnormalities. You already know to look for evolving and growing moles or freckles that are growing over 6 mm in diameter. However, darkening or blackening moles and freckles are not the only colors to watch out for. They can be red, white, blue, tan, and brown as well. The bottom line is that if you have any abnormal colors on your skin and underneath your nails, then you cannot just ignore it.

Even though melanoma is not overly common, it is very dangerous so you don’t want to believe that melanoma cannot happen to you. It can happen to anyone. And you want to make sure that you do a self-examination as often as you can which means even daily to make sure you do not have any signs of skin cancer.