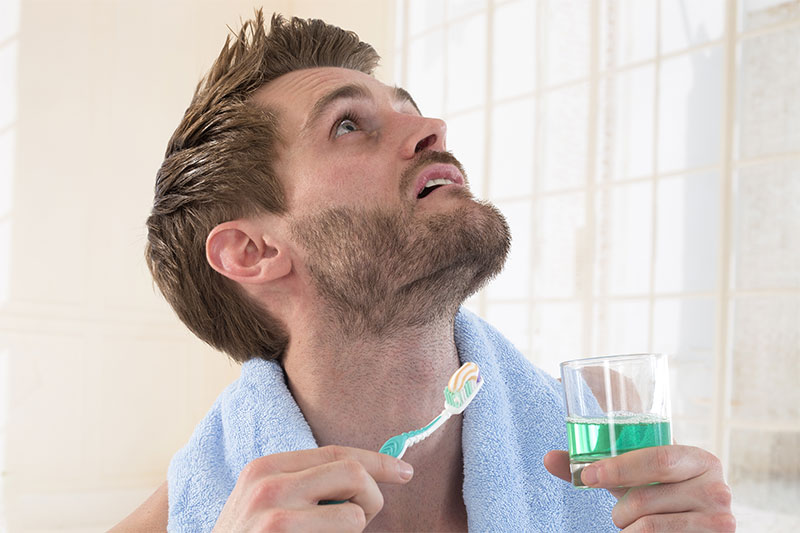 You wake up very groggy and the first thing you do is take a mouthful of mouthwash. However, because you are tired, you accidentally swallow it. Then once you realized what you did, you begin to panic because you don’t know what kind of effects that mouthwash will have on you now that you have swallowed it. Or maybe you used mouthwash in another situation when you were fully alert and found that you ended up swallowing a little bit of it before spitting out the rest. You will wonder what horrible thing could possibly happen after doing that. It is highly likely that you will not have any serious effects from it as long as the mouthwash only contains fluoride (and there are usually other ingredients as well). However, you will feel somewhat sick to your stomach which should resolve in a few hours.

It depends on how much mouthwash you accidentally swallow, but usually, you don’t swallow enough for it to cause more than an upset stomach. You will likely have nausea which will settle with or without vomiting within a few hours. You can always take anti-nausea pills such as Dramamine or take ginger, which helps to soothe the stomach. After nausea settles, you will be fine and it will be as if nothing had happened.

However, if you ended up taking in too much, then you could potentially have more serious side effects. You may feel dizzy or drowsy, and in severe instances, you may struggle to breathe and you could even have convulsions. However, the latter is quite rare. It is more likely to happen to children than adults as well. Either way, if you swallow a small amount of mouthwash, you are likely going to have an upset stomach and nothing more.

Should You Call The Doctor Or Poison Control?

If you swallow a large amount of mouthwash or your child does, then you must call the doctor and even poison control. They will likely tell you to watch and wait. If you or your child does not develop any serious symptoms after drinking the mouthwash, then you will not need to go to the ER. However, if you are starting to feel dizzy and drowsy, then someone will have to take you to the ER so you receive proper monitoring. If your child who swallowed the mouthwash shows any of those ill effects, then you must take them to the ER. However, if you or your child has to go to the hospital, there is a treatment that will help you.

How Can The Effects Of Swallowing Mouthwash Be Treated

The standard procedure as long as you or your child does not experience difficulty breathing is getting IV fluids, as well as being given activated charcoal to bind the toxins from the mouthwash so it passes right through. You or your child would be given laxatives as well so the toxins can be eliminated as soon as possible. You will be given other medications as needed.

However, if there has been any difficulty with breathing, then the ER will provide breathing support. In severe cases, kidney dialysis has had to happen as well, but that is rare. Either way, if you or your child show severe symptoms after drinking mouthwash by accident, then as long as you are proactive about getting treatment if necessary, then you or your child will be fine. The long-term effects would be having a story about swallowing mouthwash to tell some friends. Whatever you do if it happens is not to panic and prepared to become proactive if necessary meaning if more serious symptoms than an upset stomach begin to emerge.