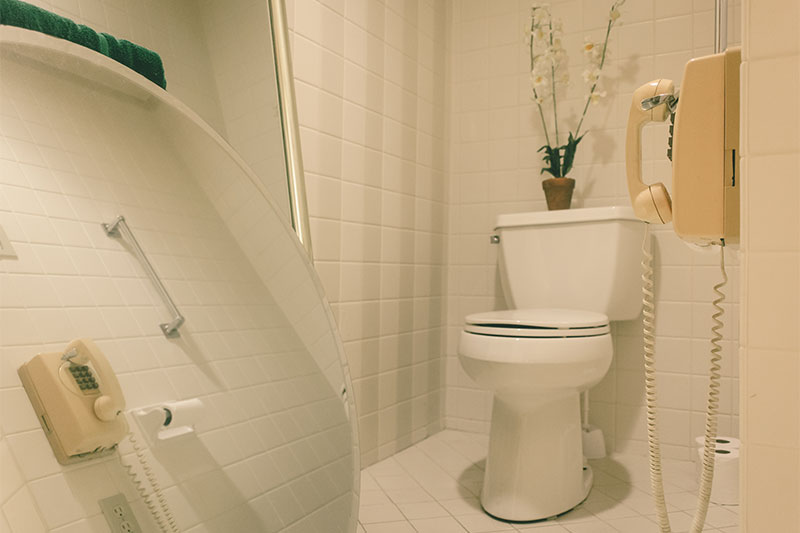 When you go and stay at a hotel whether it is a five-star one or a three-star hotel (you don’t see it so much in two or one-star hotels), you will notice one thing. There is a telephone in the bathroom, usually right by the toilet or by the sink. That never made sense considering that it wouldn’t do you any good anyway. If you need a phone in the bathroom, your smartphone is the one to use, even though it is not recommended for sanitary reasons (you do know if you flush the toilet without closing the lid, fecal bacteria shoots up and your phone could become covered). What is the reason for having a phone in a high-quality to fancy hotel bathroom? There is plenty of speculation. It could be a luxury, back from the old days.

Phones In Bathrooms Of Hotels May Be Luxurious Historically

The speculation is that during the old days before the era of mobile phones, having a phone in the hotel bathroom was a luxurious feature. That is because if you were taking a bath or sitting on the toilet for a while reading the newspaper if you got a call, you did not need to run to the room to answer it. The phone was right there for you to answer. That would explain why you will not see it in lower-quality hotels, but there may always be exceptions. Higher-end hotels are more expensive and are quite luxurious, and it is luxurious to have a phone in the hotel bathroom. That way you can enjoy your bath or do your business without having to get up! That is one speculation.

A Phone In The Bathroom May Be A Safety Issue

Another speculation is that a phone is in hotel washrooms for safety reasons. If a weak, disabled, or elderly person was using the bath or using the bathroom in general, and ended up slipping, they would need the phone to call for help. That would make sense if that was the reason for that. However, that is also speculation. And really, it could be used for anyone because anyone could end up slipping and falling in the shower of the hotel bathroom. Therefore, that would get them going to use the phone so they could call for help right away. It is not a stretch since it is a known fact that anyone can slip or fall after getting out of the bath. Especially for those who are weak, disabled, and elderly.

Also, if someone has a stroke in the bathroom, and someone else is nearby, then they can call for help right then and there as they care for the individual having the stroke. However, that is also speculation. And after doing some digging into the reason, it was found that phones in the hotel bathrooms are a holdover from days that didn’t have mobile phones as mainstream. As of December 2008, it was mandatory for four and five-star hotels to have bathroom phones whether it was mobile or landline by AAA.