Think about the time that whenever you had a stomach bug, your family members immediately caught it from you even though you tried to stay away from them. After having diarrhea or you were vomiting in the toilet, and flushing as you left the lid up, you sprayed with Lysol to kill off bacteria. Even so, after your family members used the same bathroom where you were sick ended up catching the virus anyway. How did that happen? 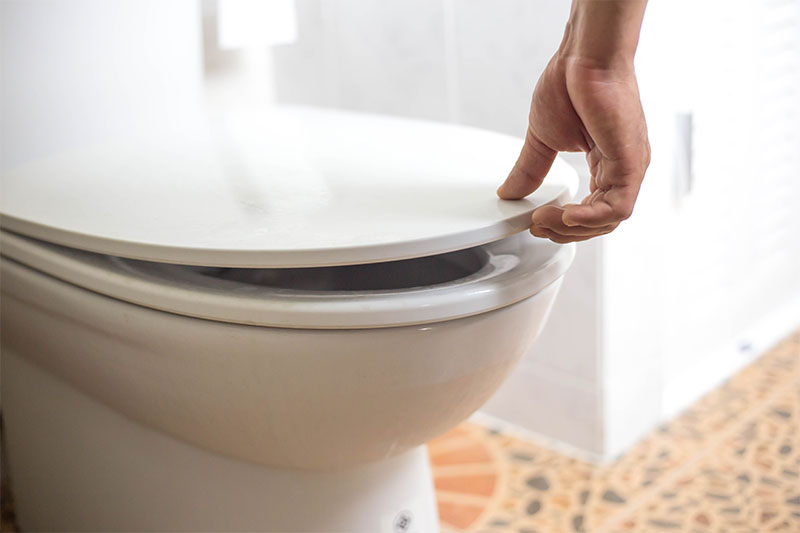 The fact of the matter is if you flush the toilet as you leave the lid up, viruses and bacteria spew in the air and fly up to six feet and can stay in the air for hours. Sure, you can spray with Lysol, and some bacteria will be killed off. However, those sprays will not kill off stomach bug viruses such as the norovirus! If you had closed the lid after being sick as you flushed, your family members may have been spared the bug. But don’t blame yourself as you did not know. This way, you are learning now about the consequences of not closing the toilet lid when you flush.

When you are healthy, you will use the bathroom for about five times a day on average. And there is a good chance that out of habit, you keep the toilet lid up as you flush. That is always a very bad idea. Because when you flush the toilet, a spray is known as toilet plume that is droplets filled with viruses and bacteria such as E.Coli fill the air. These unhealthy microbes that will make you sick will stay in the air for up to six hours.

This can be a major problem as well when you may have an infection or virus and be asymptomatic, which means you don’t know you have the illness. Either the symptoms come on later, or you remain asymptomatic. And it is one thing if you are living alone and don’t have visitors. But even then, you would not be out of the woods anyway. And, if you are living with others and you have an elderly parent or an immunocompromised family member living with you, that can be a serious problem.

This means those that are vulnerable can use the bathroom after you do as you left the lid up and flushed can easily catch whatever infection you have. Or even if you are healthy, they can become sick by bacteria or viruses that are harmless to you. But you can also even sicken yourself if you do that if you have a toothbrush and bar soap in that same bathroom.

Bacteria And Viruses From Toilet Plume Will Contaminate Your Toiletries

If you brush your teeth and wash your face in the bathroom you are using, those items will be contaminated by the bacteria and viruses that are emitted from the toilet as you flush it. Therefore, you could end up easily getting yourself sick from it as well. The same applies to the bar of soap or even the dispenser you use. They are full of unhealthy microbes and you are coming into contact with them. As you can already see how unhealthy it is to flush the toilet with the lid up for this reason.

It does not matter if you are urinating or defecating in it. Or, if you vomit due to motion sickness or anything else that would not have to do with you being sick from a virus or bacterial infection. Bacteria and viruses from previous uses will stay in the toilet. That means each time you flush regardless of what you do, you are allowing them to escape.

The Takeaway – Keep The Lid Down When You Flush

Now that you are aware of how easily the air around you becomes contaminated by toilet plume from flushing with the lid up, the way to solve this problem is to keep the lid down as you flush. This will not completely prevent any of the toilet plumes from escaping but most of it will be contained as you flush. There will be a lot less contamination. And you will need to get into the habit of it. If everyone kept the lid down as they flushed, fewer illnesses and infections would happen.