Sleepwalking is a parasomnia sleep disorder in which those affected subconsciously arise from a deep sleep and perform activities that are normally performed by conscious people. This includes walking to the washroom, cooking, cleaning, or even criminal events such as homicide. Sleepwalkers are usually unaware of their actions unless they are woken up during the episodes.

Who are at risk?

Sleepwalking is prevalent among children aged 3-7 years. It mainly occurs at between 11pm and 1 am, when one is soundly asleep. The episodes may be as short as 30 seconds to 30 minutes long, and the longer the episode the more dangerous it can be, especially when the sleepwalker is exposed to dangerous objects. Children who are affected by bedwetting, night terrors and obstructive sleep apnea face high risk of sleepwalking. Sleepwalking is also common among adults, especially those who are drug users or those suffering from psychological disorders. Use of sedative agents and febrile illness also exposes adults to sleepwalking.

Causes and Risk Factors for Sleepwalking 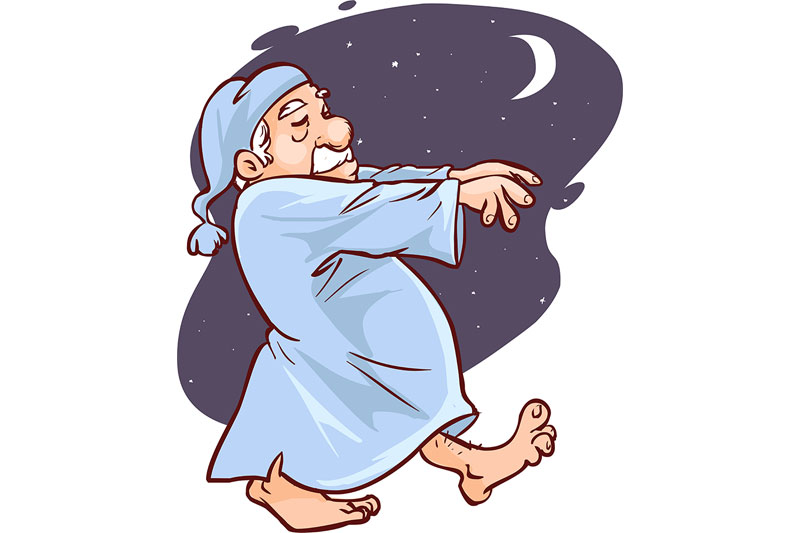 Sleepwalking is characterized by a myriad of symptoms. To begin with, sleep walkers sit up on their beds during the slow wave sleep stage. They then do several tasks subconsciously, and they have no memory of doing such tasks the following morning, unless they are woken up in an episode. This is why several criminal cases involving sleepwalkers have remained unresolved. Sleep talking and sleep eating are other clear signs that sleepwalking is on the way. Screaming is also common among sleepwalkers who experience sleep terrors. This is so especially among children and young adults.

Apart from coping with the effects of sleepwalking, sleepwalkers have more fish to fry. They are also faced with other medical conditions such as arrhythmias, fever, night time asthma and convulsions. Gastroesophageal reflux disorder is also common, and its undeniable adverse effects on sleep are an insult to the injury. Obstructive sleep apnea, post traumatic stress disorder and personality disorders are other bitter pills to swallow, not to forget panic attacks which mainly occur when a sleepwalker is awakened in a sleepwalking episode.

As noted earlier, the exact treatment for sleepwalking remains an enigma. This calls for indulgence in behavioral practices that can alleviate the dangers of sleepwalking events. First things first, sleepwalkers should be gently guided back to their beds without waking them up. They should also be encouraged to exercise proper sleep hygiene and keep sleep deprivation at bay. This involves establishing a sleep and nap schedule and following it to the latter. Sleep impairing foods and drinks should also be avoided during bedtimes and instead, playing soothing music can set the wheels of sleepwalking-free slumber into unending motion.

Given the fact that sleepwalking is genetic, it may not be preventable. However, it is possible to prevent some dangers associated with sleepwalking by taking some precautionary measures. Some of these measures include keeping all the doors and windows locked. The bedroom should be an ideal sleep playground, where all obstacles that could cause a stumble during sleepwalking are removed, as well as any other dangerous objects that can elicit criminal activities among sleepwalkers.

Sleepwalking is not harmful but it could lead to harmful effects. For this reason, one may need to consult a sleep specialist when the symptoms persist, to avoid catastrophic repercussions.