The idea of ceasing to wear underwear does not seem like one you would likely follow through with as the idea of going commando seems like it is something out of your comfort zone. However, there are always exceptions. And perhaps that going commando is an idea to entertain if you think you can actually handle the idea of that. 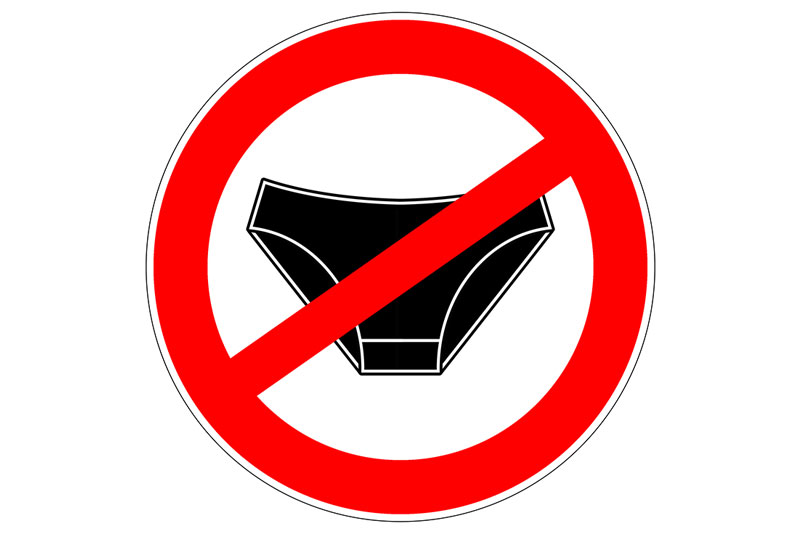 Why Do You Have To Wear Underwear Anyway?

Does it really keep your pants cleaner if you do? The first thing you do when you get dressed each morning is to put on your underwear before you put any other garment of clothing on yourself. And you want to make sure that your underwear is well-hidden. Your underwear could appear to be tacky and embarrassing such as having large red polka dots on it. But really, why do you have to wear it? Is it due to societal norms? Let’s face it. Most things that we do are the result of what is expected in society. However, more and more women and men are ditching the idea of wearing underwear and are finding that they provide benefits.

What Are The Benefits Of Not Wearing Underwear?

The benefits for men and women vary. However, women that no longer wear underwear is not only more comfortable. However, thy are finding themselves not having to deal with UTIs and discomfort. When you wear underwear, you are allowing bacteria and fungi, noted as Candida to breed and form. This can cause yeast infections as well as UITs and other infections. That is because the space that underwear leaves is tight on your pubic area and it allows unhealthy microbes to thrive which is how these infections are caused.

The lack of underwear allows you to have space in your pubic area to breathe better and therefore, unhealthy microbes forming and growing are less likely to happen. Therefore, health is better for those who don’t wear underwear but comfort levels go up as well.

Men also gain benefits from not wearing underwear. Firstly, they end up with fewer issues having to do with testicular health. Men that want to father babies that don’t wear underwear will have a much easier time doing so. The extra space in their pubic area will allow proper breathing and ventilation. Heat immediately halts healthy sperm production and causes existing sperm to not be healthy with low motility. Therefore, when no underwear is worn, it removes the excess heat. However, men will only have the full benefit of that if they don’t wear tight jeans either. Because wearing tight jeans without underwear will also cause heat to trap in the area which only defeats the purpose.

However, most people do end up not wearing their underwear overnight as they find it more comfortable without it. And besides, no one will see anyone when they are in their beds and in the privacy of their homes. Therefore, they can enjoy going commando when it is their time to go to bed at night. And it is the best thing that people can do for themselves if they don’t wear underwear overnight. This increases comfort levels and reduces the risk of any type of infection. Imagine how much more this would happen if people did not wear underwear during the day when they are out and about in their activities. But there are still considerations they need to make before they go commando.

What Do People Who Want To Stop Wearing Underwear Need To Know?

Before ditching your underwear, you want to make sure that the clothing you have will hide your privates completely. This means to remove any clothing that is sheer and see-through. Remove clothing that has thin fabrics where you can see through the private parts of your body. Get thick-fabric-made clothing. Clothing that will hide everything. The last thing you will want is to be embarrassed. Therefore, if you stop wearing underwear, you will end up changing your wardrobe unless you don’t have many clothes that are made of thin fabrics.

Therefore, as you see that if you stop wearing underwear it is best to do for your health. However, you need to be prepared to make sure that the clothing you wear supports your decision without leading you to moments of pure embarrassment.